Palaces in the Night: The urban landscape in Whistler’s prints

The work of one of the most controversial artists of the mid-19th  century, James Abbott McNeill Whistler (1834-1903), is featured this summer at the Fitzwilliam Museum in Cambridge. The exhibition, which continues until September 8, centres on the cityscapes for which Whistler is widely celebrated as a printmaker. Born in the USA in 1834, Whistler’s family travelled between the USA, Europe and Russia due to his father’s occupation as a civil-engineer. In 1859, aged 25, Whistler settled in London, choosing to reside alongside the working people of Wapping and Rotherhithe, frequenting the pubs and theatres, backstreets and riverside wharves where they lived and worked. Before settling in London, Whistler had spent three years at the US Military Academy at West Point where, despite being dismissed by the then superintendent Robert E Lee, he became highly proficient in map drawing and was employed in the etching office of the US coastguard after his dismissal. The precision that he learned at West Point and with the Coastguard would greatly benefit him in his later career. 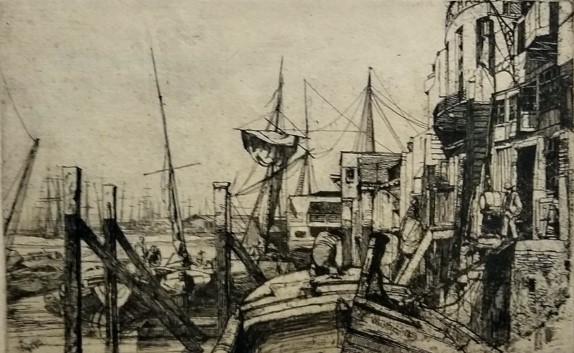 The exhibition also includes work from Whistler’s travels in Europe, but undoubtedly it is the work that depicts London, a London that has long passed into history, that most captures the attention. Whistler was able to capture this ramshackle world of wooden jetties and wharves through spending time observing the intimate details of everyday life and shunning any sensationalism that might distort the real lives of the people he drew. 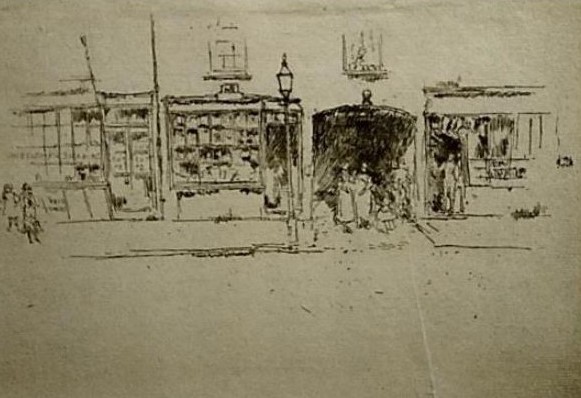 ‘…the evening mist clothes the riverside with poetry, as with a veil – and the poor buildings lose themselves in the dim sky – and the tall chimneys become campanile – and the warehouses are palaces in the night – and the whole city hangs in the heavens’ James Abbott McNeill Whistler 1885.

To find out more information about the exhibition, click here.

How do you Camouflage a Power Station?

At the start of the war, the Germans already knew where many of Britain’s important industrial targets were situated. The aim of the camoufleurs was to “confuse a pilot at a minimum of 5 miles distant and 5,000 feet up during daylight.” (Ministry of Home Security).

Camouflage officer Robin Darwin wrote in 1943 “the bomb aimer must rely on what he sees with his eyes and a moment’s doubt, the slightest hesitation may send his bomb far wide of the mark.” Concealment and Deception, The Art of the Camoufleurs of Leamington Spa 1939-1945.

All the work done by the camoufleurs came from the initial observations and jottings. These were made by the model designers when they flew over installations that were to be camouflaged.  Their work was vital to the camoufleurs. It meant they had the most accurate representations of how the buildings and their surroundings looked from the air.

The pilots were from the RAF photo unit based at Baginton aerodrome in Coventry. The pilots were often too old for operational service, but had a great deal of experience in the air. This meant the designers could make notes at all the different heights and times of day that they required. These notes and photographs were then used by the camoufleurs to develop perspective drawings of the proposed camouflage schemes. 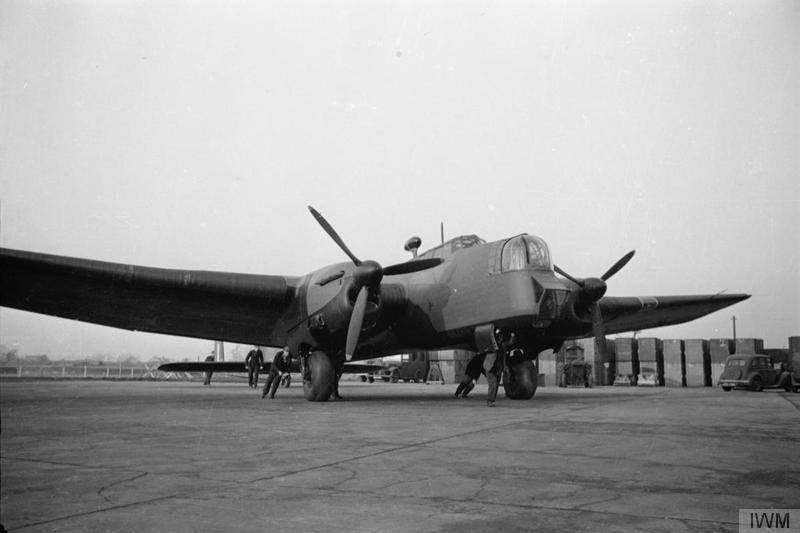 The more complex camouflage schemes were tested on scale models in the Rink in Lemington Spa. Requisitioned by the government in 1939, the (Skating) Rink was located at the bottom of the Parade in Leamington.

As Colin explained many years later to his biographer, Chloe Bennett “You worked on a scale model and … there was a turn-table which you could put it on and a moving light, which represented the sun, and you got up on a platform, which was about the height that a bombing pilot would come in at, and turn the thing around to see how it reacted to different times of day.” 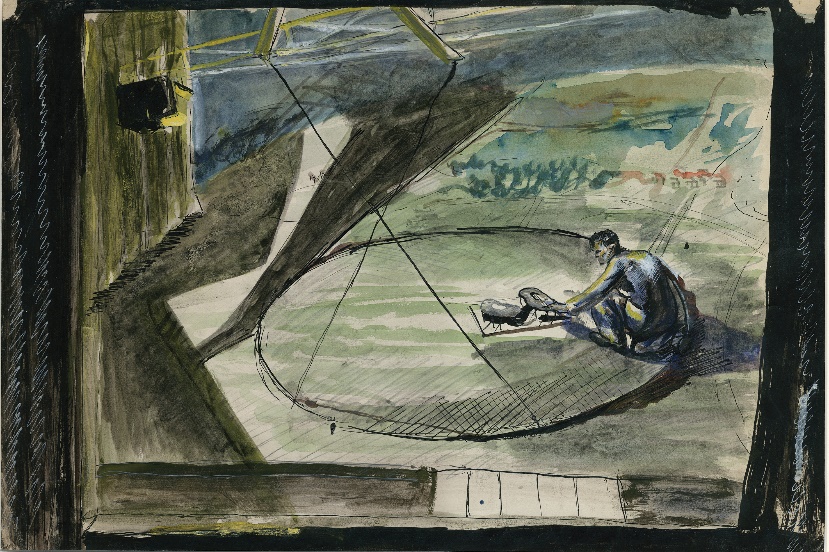 Colin Moss “The Turntable in the Skating Rink, Leamington Spa, 1939-40”

Virginia Ironside (daughter of camoufleur Christopher Ironside) memorably described the Rink as “a giant studio” where “artists slaved away over enormous turntables on which they had constructed models of factories and aerodromes, lit by ever moving moons and suns attached to wires”. 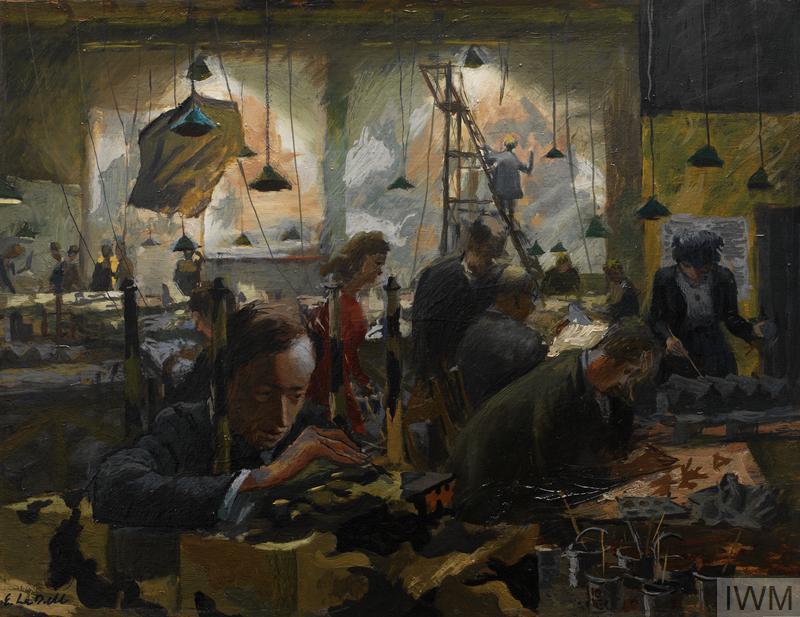 “The work in the Roller Skating Rink was supported by the presence of a map section and photographic archive. Staff used expensive, high-quality (German made!) Leica cameras on tripods to take photographs of the models before and after camouflage had been applied.” Concealment and Deception, The Art of the Camoufleurs of Leamington Spa 1939-1945.

Once the camouflage design was finalised, the model, along with colour charts showing the tints of paint to be used, was sent to the site. Ground patterning was applied first.  Then representations of buildings in an overall disruptive pattern of dark and light shapes (that masked the entire area) were added.

The brushes the painters used consisted of rope, bound together by scrap tin to allow the painter to cover a large area with one stroke. There was an emphasis on practicality rather than finesse and not wasting materials; hence the use of scrap tin. The simple equipment allowed painters to work quickly, often able to cover 110 square metres a day. 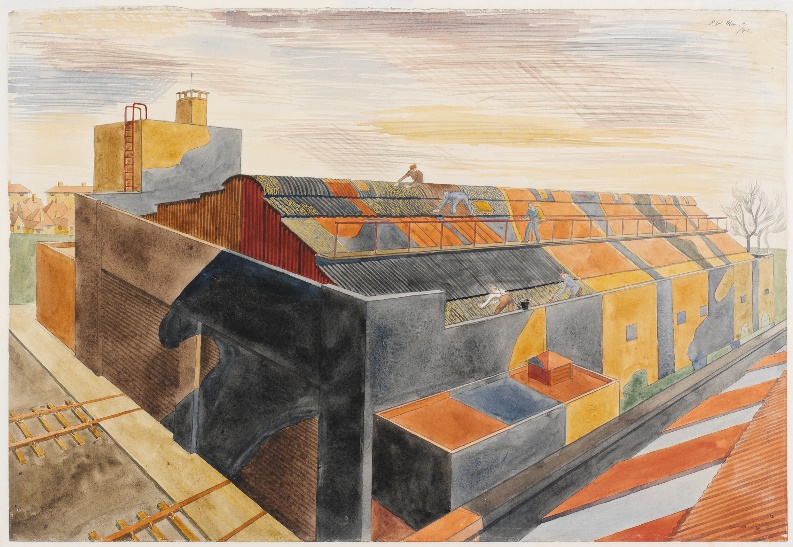 Ipswich Docks – Then and Now through the artist’s lens

The docks area of Ipswich has been used for trade for well over a 1000 years. When Colin started teaching at the Ipswich Art School in the late 1940s, the dock had yet to transform into the stylish waterfront we see today. The commercial landscape, with its wharves and warehouses, proved to be a source of inspiration for both Colin and his students.

“I used to think the Docks were the best thing about Ipswich. I used to take a lot of sketching classes of students down to the Docks, and in those days they were far more free and easy about where you could go there.” Colin Moss: Life Observed. 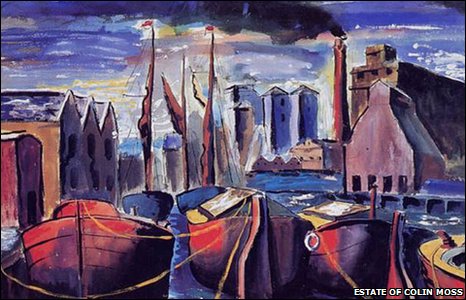 Judy Foster, one of Colin’s students between 1955 and 1959, was similarly impressed. She particularly remembers “a peculiar kind of smell from the Docks, the yeast … the maltings and the sugar beet which wafted one way or another, depending on the direction of the wind.” 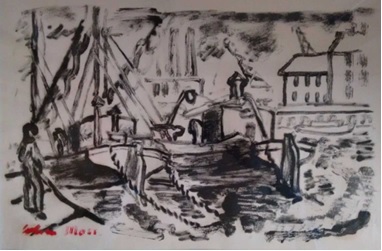 “What made Colin special was that he brought a European sensibility to local art. He studied with Oskar Kokoschka in Salzburg, Austria and absorbed his very colourful view of the world. When he returned to Suffolk, he produced a series of local landscapes including views of Ipswich Docks which he executed in a very strong, vibrant style. The local people hated it – he painted these pictures in strong pinks and purples, not all the colours he was seeing – but this was the influence of Oskar Kokoschka.” Tony Coe – John Russell Gallery, Ipswich

Over the past two decades, Ipswich’s waterfront has been transformed. Now a stylish area of restaurants, shops and apartments, and with a thriving marina, buildings from the waterfront’s rich maritime past, sit alongside developments from the new. 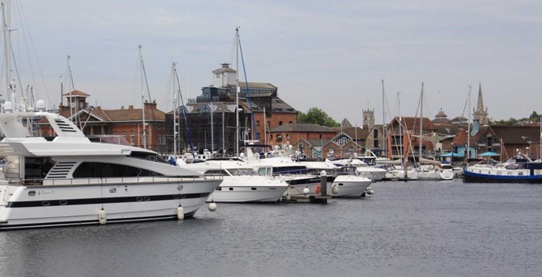 You have Successfully Subscribed!

This site is maintained by the Estate of Colin Moss

Our thanks go to the Imperial War Museum for granting permission to use their images.

We use cookies to ensure that we give you the best experience on our website. If you continue to use this site we will assume that you are happy with it.OKCookie policy